Auction Of 2080+/- acres in Northwestern Montana

United Country - Northwest Realty Inc. & Auction Services: 2080 /- acres in Northwestern Montana. This farm is productive land located in Toole & Glacier County. Compromised of two farms there are 627 /- acres of Organic Hay ground and another 1460 /- acre Grain Farm. This farm also offers 3 natural springs that run through the bottom of a canyon creating an excellent natural wildlife habitat including, Whitetail and Mule Deer, Sharp Tail Grouse, Hungarian Partridge and Ring Neck Pheasant. Aside from the farm income, the property also offers 15 Wind Turbine leases that bring and additional income. This is a great investment opportunity.
Posted by robwire at 5:14 PM Links to this post 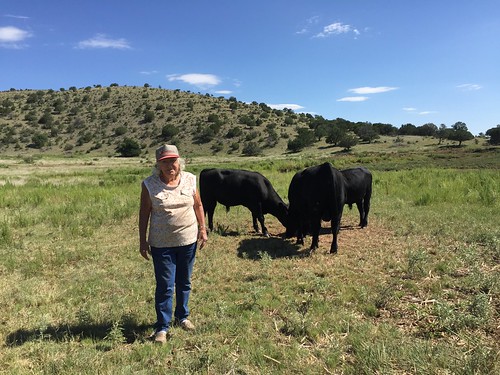 Marjorie Fleming has been cattle ranching since she was a teenager. Now, at age 87, she has no plans of quitting anytime soon.
“I haven’t thought about stopping,” said Fleming. “I like ranch life, I like being outside and I can get out on my four-wheeler and get around most places and do what I used to do with a horse.”
Growing up in San Andres, N.M., Fleming and her brother used horses to round up goats and cattle on the family ranch. Both parents were disabled — her father with a hip injury and her mother with polio — leaving Fleming and her brother to do the heavy lifting and chores.
When her brother left to serve in the military, Fleming’s father sold the goats, leaving her to care for the cattle. She later married a cattle rancher, taught her children to ranch and now her grandchildren join her regularly on her 1,400-acre operation, learning to raise registered Black Angus bulls.
“I’m very proud of my cattle,” said Fleming. “I believe people know they can come to me for good, quality bulls and that makes me feel good.”
http://blogs.usda.gov/2015/11/05/87-year-old-cattle-rancher-not-stopping-anytime-soon/
Posted by robwire at 12:08 PM Links to this post

When you call Kin to make a dinner reservation, be sure to set aside a few minutes. Information beyond the size of your party and desired time of arrival will need to be discussed.
The beer-wine situation, for example. (Bad news: no liquor license. Good news: no corkage fee). Also the seating situation, which is this: There is only one table, a communal one rimmed by 10 chairs. The rest of the seating is found along two bars, one L-shaped and facing in, the other linear and window-side.

http://www.nola.com/dining-guide/index.ssf/2015/11/kin_a_small_new_orleans_restau.html
Posted by robwire at 10:35 AM Links to this post

One Mississippi Series Pilot On Amazon

Opening Shot: Comedian Tig Notaro — playing a version of herself — is speaking into a radio microphone. She is telling a bittersweet story about how she used to run a “world-class restaurant” in her childhood bedroom for her stuffed animals. Her mother saved the furry friends in a trunk and Tig says that if comedy doesn’t pan out, she can always take the animals out and reopen the restaurant.The gist: One Mississippi is a “sad-com” following Notaro’s struggle to deal with her mother’s sudden death while battling both C-Diff and breast cancer. The comic had a legendary set at Los Angeles nightclub Largo a few years back where she made exquisite humor out of her slew of recent tragedies and this is the dramatization of that time. The show is called One Mississippi as a nod to the fact that she’s returned to her small hometown in the Southern state to process it all.
http://decider.com/2015/11/05/stream-it-or-skip-it-one-mississippi-on-amazon-prime-video/

Posted by robwire at 8:39 AM Links to this post

Posted by robwire at 8:27 AM Links to this post

Analysts had forecast that U.S. employers added 185,000 jobs and the unemployment rate would hold steady.

This report is closely watched because it may offer hints on whether the Federal Reserve will raise interest rates in December. A strong report would give the Fed confidence to boost rates.

Interest rates have been at record lows since the 2008 financial crisis. Testifying before a committee of the U.S. Congress on Wednesday, Fed Chair Janet Yellen described the U.S. economy as "performing well" and said an interest rate hike in December was a "live possibility."
Posted by robwire at 7:45 AM Links to this post

Grain Sorghum Busts Bins and Boundaries | Agweb.com: Any farming decision is a gamble, but grain sorghum’s basis was too tasty for Hunter Byrd to ignore in 2015. With the numbers penciling out to good profit, the 27-year-old Dundee, Miss., producer took his first shot at grain sorghum with 800 acres.

As a drought-tolerant crop with relatively low input costs, grain sorghum production surged across the U.S. in 2015, and Byrd’s choice was no exception. As he approached April planting, the basis on grain sorghum was attractive.�

Without bad new we would have no news | Agweb.com

Without bad new we would have no news | Agweb.com: Futures prices for grain and soy markets just continue to grind sideways, rallying one day and falling the next and here this morning we are trading a bit defensively once again.� We continue to face a situation of decent underlying demand with commercial support but more than adequate supply overhead keeping us boxed within relatively tight ranges.�
Posted by robwire at 7:32 AM Links to this post

Robust Alfalfa Crop Will Add to Stocks | Agweb.com: With harvest complete in nearly all parts of the country, it is becoming clear that this year’s robust alfalfa and hay crops likely will only add to what are quickly becoming large national stockpiles.
Posted by robwire at 7:31 AM Links to this post

Grain markets are mixed, slightly reversing yesterday's action, with corn and soybeans higher and wheat lower. Position evening ahead of the weekend and next week's USDA Supply and Demand Report is expected.

Sellers were active yesterday highlighted by the afternoon close with almost 15,000 contracts of corn�and 4,700 contracts of soybeans�traded in the last minute of the session. Much of the weakness was attributed to poor weekly export sales.
Posted by robwire at 7:30 AM Links to this post