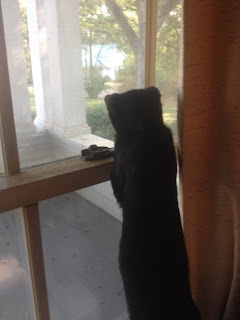 Alexandra is at the house in New Orleans this week so I have the little black kitten and mama cat again. The kitten is an indoor cat but loves to look out the windows especially at the hummingbird feeder.
Posted by robwire at 9:51 AM

“We’ve been married 32 years. Who could believe that? I have a hard time believing that,” Mary said. “But the funny thing was, when we got married in 1983, I was at 16 WAPT and he was at WLBT, and we had to decide who we were going to invite to the wedding. It was either keep it small with the families, or go all out and invite the public, and he said, ‘Eh. We’ll keep it small with the families.’ ”

Mississippi State played in-state rival Southern Mississippi and came away with a 34-16 victory Saturday. The Bulldogs will be trying to beat LSU for the second straight season, led by quarterback Dak Prescott.

Is Lafitte the best retirement suburb for New Orleans? Take our poll | NOLA.com

Is Lafitte the best retirement suburb for New Orleans? Take our poll | NOLA.com: Lafitte is known for many things. It was a favorite haunt of one of history's most infamous pirates, Jean Lafitte, and the shrimp are fresher than anywhere, and fried to perfection in several little out-of-the way restaurants.

But now we can add something new to the list. Lafitte has been named the best suburb of New Orleans to move to for one's golden years in retirement by real estate site Movoto.com.� With a population that is already almost 28 percent age 65 or over in Lafitte, Movoto may be on to something.

Edgard came in at No. 2 and Westwego was No. 3. Read the�full story here.